Evidence for the Case

This section is a justification of points in ‘The Case Simply Put’. The subjects of these points, in order, are 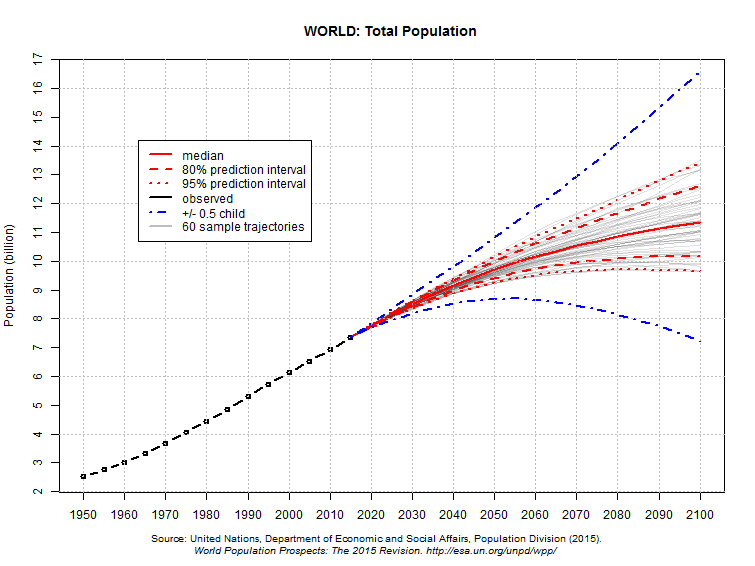 The United Nations issues projections for future population every two years. Because many factors affect population numbers, they produce a range of estimates, with the central red line representing the median figure. In 2017, it calculated the following high, low and median figures (in red in the graph above) for the middle and end of the century:

Note: the low and high variant figures represent half a child less or half a child more per mother than the median variant. One child more or less every two mothers. This suggests that a reduction in world population is achievable, as the figures for the low variant indicate.

2 The figures for total mass of land mammals derive from the work of Vaclav Smil, who is a Czech-Canadian scientist and policy analyst. He is Distinguished Professor Emeritus in the Faculty of Environment at the University of Manitoba in Winnipeg, Canada. See his entry in Wikipedia on https://en.wikipedia.org/wiki/Vaclav_Smil

The figures are in his book ‘The Earth’s Biosphere: Evolution, Dynamics and Change’, on which the diagram below is based.

Each square on the diagram represents a million tons. Red squares are humanity, yellow squares are their livestock and domestic animals, green squares are wild animals. 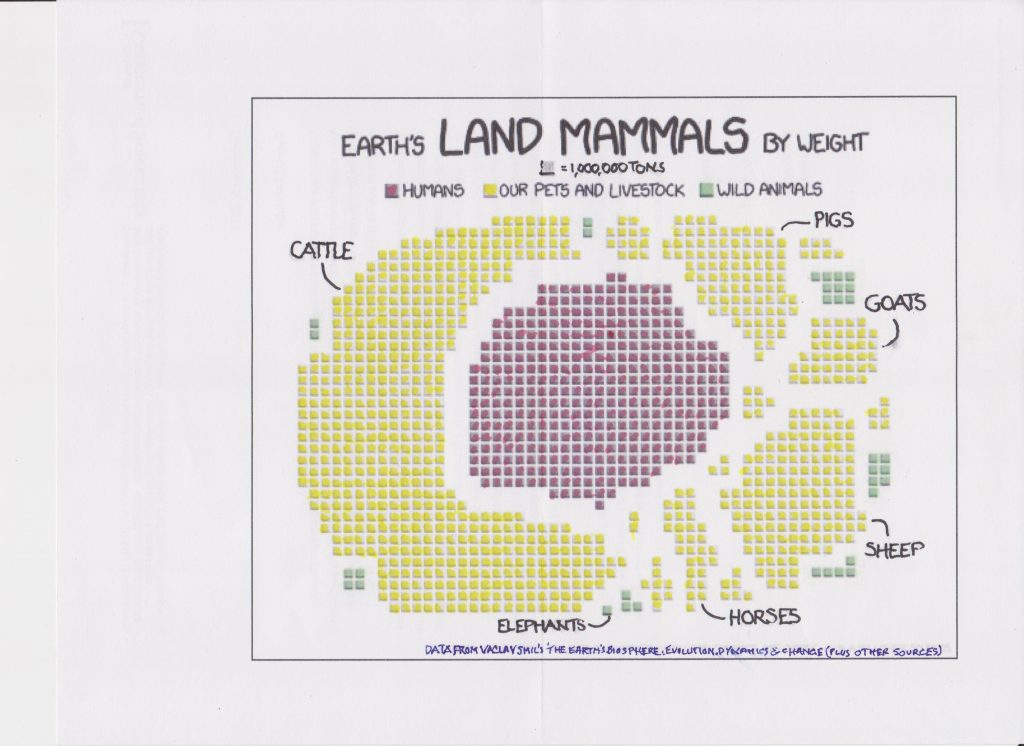 3 Loss of wild animals has been widely reported in 2015: this BBC report is typical: http://www.bbc.co.uk/news/science-environment-29418983 .Reported in 2016 that wild animal numbers have shrunk by more than 50% since 1970. a period in which human numbers have doubled: see http://tinyurl.com/h6qmgee

4 Extinction Rates This article from the Center for Biological Diversity suggests that the present extinction rate is between 1000 and 10,000 times the natural background rate, and suggests we are now undergoing the sixth great extinction. See http://tinyurl.com/mz2pph3 . There have been five major extinction events in the history of the Earth, the last being at the time of the extinction of the dinosaurs.

The biologist E. O. Wilson, in his book ‘The Diversity of Life’, writes ‘…to give an idea of the dimension of the hemorrhaging, let me provide the most conservative estimate that can be reasonably based on our current knowledge of the extinction process…Even with [various] cautious parameters, selected in a biased manner to draw a maximally optimistic conclusion, the number of species doomed each year is 27,000. Each day it is 74, and each hour 3…Human activity has increased extinction between 1000 and 10,000 times over [normal background rate]… Clearly we are in the midst of one of the great extinction spasms of geological history.’  And, ‘The raging monster on the face of the land is population growth. In its presence, sustainability is but a fragile theoretical construct.’

5 The area of land surface subject to human influence is variously reported. This article from National Geographic magazine for Dec.2005 states 40%: http://tinyurl.com/7qxe3y9

However, this article from the Geological Society of America dated Dec 2012 estimates that humans have modified more than 50% of the Earth’s land surface: http://tinyurl.com/o336tco

The GSA’s figure is particularly likely to be right. If the National Geographic article is also right, this suggests a continuing rise in the area of land affected from 2005 to 2012, and doubtless this is continuing.

Humanity has used the best land already: most of what remains is ice-cap, desert, tundra or mountains

7 Soil degradation. See http://tinyurl.com/jyun7ot , which states ‘… when a significant destruction of the vegetation takes place (of natural origin such as an avalanche or human origin), the disturbance undergone by the ecosystem is [extreme]:…erosion is responsible for the destruction of the upper horizons of the ground, and is at the origin of a phenomenon of reversion to pioneer conditions. The phenomenon is called retrogression and can be partial or total (in this case, nothing remains beside bare rock). For example, the clearing of an inclined ground, subjected to violent rains, can lead to the complete destruction of the soil….Erosion is strongly related to human activity.’ See also http://tinyurl.com/dxeuu8r  on desertification.

8 Sea level rise . See the Wikipedia site on http://tinyurl.com/jt2ke3e, which includes the statement ‘Because of the slow inertia, long response time for parts of the climate system, it has been estimated that we are already committed to a sea-level rise of approximately 2.3 metres (7.5 ft.) for each degree Celsius of temperature rise within the next 2,000 years.’ Since temperatures have risen by one degree since pre-industrial times, it would appear that a rise of at least 2.3m is unavoidable.’ Note also that this rise is thought to be accelerating.

See also this article on the site of The Climate Institute: http://www.climate.org/topics/sea-level/ , which also includes information on acidification. To quote the article, ‘During the 20th century, sea level rose about 15-20 centimeters (roughly 1.5 to 2.0 mm/year), with the rate at the end of the century greater than over the early part of the century. Satellite measurements taken over the past decade, however, indicate that the rate of increase has jumped to about 3.1 mm/year, which is significantly higher than the average rate for the 20th century.’

9 Overfishing This article on the website of the Center for Biological Diversity describes the relationship between human population growth and the oceans. It is on http://tinyurl.com/pssn8to To quote, ‘The global fish crisis has become so severe, scientists and wildlife managers are breaking the human population taboo, calling not only for reduced consumption and better regulation, but for alleviation of poverty and “stabilization of the world’s human population” ‘. This site also draws attention to other ways we damage the oceans, from runoff of fertilizers and other pollutants, rubbish, dead zones and the ‘Pacific Gyre’.

10 Climate change and weather. The US National Oceanic and Atmospheric Administration,  on this site, http://tinyurl.com/nl2pt5y draws the distinction between climate and weather, and makes the following point: ‘[we] have determined that human activities have become a dominant force, and are responsible for most of the warming observed over the past 50 years. Human-caused climate change has resulted primarily from changes in the amounts of greenhouse gases in the atmosphere, but also from changes in small particles (aerosols), as well as from changes in land use, for example. As climate changes, the probabilities of certain types of weather events are affected. For example, as Earth’s average temperature has increased, some weather phenomena have become more frequent and intense (e.g., heat waves and heavy downpours), while others have become less frequent and intense (e.g., extreme cold events). ‘

11 Dependence of agriculture on oil. This article from The Worldwatch Institute, is very relevant: www.worldwatch.org/node/554 . It introduces itself with the statement ‘Increases in food production, per hectare of land, have not kept pace with increases in population, and the planet has virtually no more arable land or fresh water to spare. As a result, per-capita cropland has fallen by more than half since 1960, and per-capita production of grains, the basic food, has been falling worldwide for 20 years.’

An article on tinyurl.com/j9werma , is also relevant, but steers clear of population.

The book ‘Farmageddon, the true cost of cheap meat’, by Lymbery and Oakeshott, is worth reading in this connection.

12 Insects and other unconventional sources of protein. This is an article from the Food and Agriculture Organisation of the UN on the possible use of insects for food, www.fao.org/forestry/edibleinsects/en/ , which I personally do not find as offputting as this article, which is about the production of artificial beefsteak from human faeces: tinyurl.com/ptuvskf

There is also an academic paper on  http://tinyurl.com/ha7edua about the extract of protein from sewage: you would have to pay to see the whole paper, but the introduction on the site will suffice to show that the idea is being taken seriously.